This search form uses an instant search feature. As you type, search results will appear automatically below the search field. When you've entered you desired search terms use tab to navigate through the available results and hit enter to open the selected page or document.
EDIT LEFT

You are welcome to contact our Governing Board Members via email by clicking on their name below. 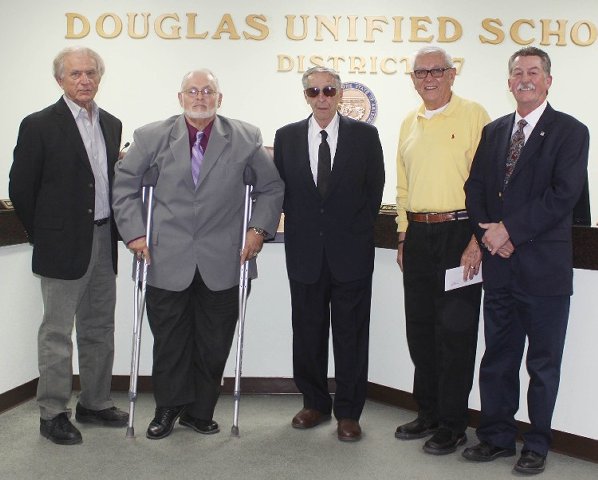 Mr. Borane has been fortunate to have attended all three Arizona universities in preparation for his career in public education, and two Latin American universities in his area of specialization, that of Spanish Literature. With our local school district, he has served as high school Spanish teacher, department chairperson, athletic director, vice-principal, assistant superintendent and as Douglas Unified School District #27 Superintendent for 15 years.

On the county, state, national and international levels, Mr. Borane has been a member of and served as a consultant to a variety of Educational, Governmental, and public administrations, including serving as a senior policy advisor to Governor Janet Napolitano and representing Governor Mofford's office as an Arizona Commissioner to the Education commission of the States. He has been recognized by and appointed to a variety of state boards by five Arizona Governors.

Mr. Borane was appointed by Arizona Governor Babbitt to the Arizona State Board of Education and served as its vice-president and president for five years. He also served as Arizona State Deputy Superintendent of Public Instruction for eight years where he was responsible for oversight of the daily operation of the Arizona Department of Education. Further, Mr. Borane has been honored with many distinguished awards in the educational and governmental fields. Outstanding among his awards and recognitions are the Arizona State Legislature Cesar Chavez Community Award, twice with the LULAC State Community Award, Governor Symington's Recognition for Outstanding Service to Education in Arizona, as well as Governor Hull's Award for Excellence of Quality and Continuous Improvement in Arizona State Government.

More recently, he was appointed as a member to the Homeland Security Council Task Force in Washington, D.C. by United States Homeland Secretary Janet Napolitano.

Internationally, Arizona Governor Napolitano awarded Mr. Borane the Outstanding Service Award for Promoting Strong and Cooperative Relationship with Mexico and Latin America. In addition to having been a policy advisor to the Municipality of Agua Prieta, Sonora, Mexico, Mr. Borane has been acknowledged to have been of distinguished service to Mexico through its Ohtili Award, the highest honor given by Mexico to a foreigner.

He has devoted his entire adult life to promoting the well-being and education of our community's children and those of the State of Arizona in general as exemplified by his being the recipient of the Arizona School Boards Association Award of Merit for Exceptional Leadership and Integrity and Distinguished Achievements for the Betterment of Arizona Public Schools and the Students They Serve.

Dr. Edward Gomez was born and raised in Pirtleville, Arizona. He graduated from Douglas High School in 1959. He attended St. Louis University College of Arts and Science and the School of Dentistry. Dr. Gomez graduated with a Doctor of Dental Surgery degree in 1965. He retired from the United States Naval Reserve in 1984 with the rank of Captain, United States Naval Reserve Dental Corps. He returned to Douglas in 1967 and had a dental practice in Douglas until 2005. He has served on many civic committees. Dr. Gomez has been president and a member of the Douglas Rotary Club. He served as a board of director for the Arizona Town Hall. He is a delegate to the House of the Arizona Dental Association. Dr. Gomez is presently employed as a dentist at the Arizona State Prison Complex in Douglas. In 2008, he was ordained to the Permanent Diaconate for the Diocese of Tucson, Arizona.

"My goals are to provide a top-grade education to our students, a safe environment in schools, and my utmost support for the staff and teachers in our district".

Mitchel R. Lindemann was born in Valley City, North Dakota, and was raised primarily in Bismarck, North Dakota where he graduated from Bismarck High School (1976) and Bismarck Junior College (1978). He received his Bachelor of Science degree in Vocal and Instrumental Music from Valley City State University (1981). After graduation, he taught in the North Dakota Public School systems before moving to Arizona in 1986 where he accepted a teaching position with the Duncan Unified School District.

Mr. Lindemann was hired to teach Instrumental Music (Band) for the Douglas Unified School District in 1988. He received a Master of Arts in Elementary Education degree (1991) and a Master of Arts in Education Administration degree (1993) both from Northern Arizona University (NAU). In 1997, Mr. Lindemann received the Distinguished Alumni Award from NAU. Mr. Lindemann completed an Internship for Public School Superintendence in 2000 from the University of Phoenix. Mr. Lindemann also holds Arizona certification in English as a Second Language (ESL), Structured English Immersion (SEI), and Administration.

In 2004; as a Civic-minded individual, Mr. Lindemann applied for and was awarded the Vietnam Moving Wall Memorial which toured Douglas from April 9 through 17, 2005, and was presented at the Eight Street Veteran's Park.

Goals: To strive to fulfill the Board goals, the District Mission statement, and to provide a quality education for our students while maintaining fiscal responsibility ensuring the best results for the taxpayer's money. To fulfill the role of a School Board member; which is according to the National School Boards Association, to be the education watchdog for the community.

I was born and raised in Douglas, Arizona. I attended Douglas public schools and graduated from Douglas High School in 1970. I attended Cochise College and later worked for Phelps Dodge, I was retired in 1982 because of my disability. I'm presently the Sr. Vice President of the Douglas Area Food Bank and member of the Douglas Noon Lions and past president. I've been serving our community with many other organizations and will continue whenever asked.

Natalio (Nat) Sabal was born in Sevilla in Southern Spain and immigrated with his family to New York City during the first half of the 20th Century. He grew up in a family that instilled the values of education and moral responsibility to one's country, community, and family. Having graduated from DeWitt Clinton High School in the Bronx. He immediately enlisted into the Navy where he was a medic during the Korean War. After an honorable discharge, he used his GI Bill and various part-time jobs to attend Michigan State University, where he received a degree in Social Sciences Divisional Major.

After graduation, Mr. Sabal worked for Abbott Laboratories, at the time the largest manufacturer of prescription drugs located in North Chicago, Illinois.

In 1971, he moved to Southern Arizona, working for the Capins Corporation, heading the stores and management for the multimillion-dollar business in Southern Arizona. After leaving Capins, Mr. Sabal became the Manager of Phelps Dodge Mercantile in Douglas, Arizona. He ran the Phelps Dodge store until the mid-1980s.

In the late 1970s, he became actively involved at Cochise College as a board member for 22 years and Chairman of the Board for many consecutive terms. In 1981, he acted as Cochise College President, oversaw the expansion fo sister campus throughout the 1980s in Sierra Vista, and was a key member in the building of the Sierra Vista Campus.

Mr. Sabal has worked as a Juvenile Probation Officer in Douglas, Arizona for 25 years. On June 10, 2010, the Arizona Foundation for Legal Services and Education awarded him the John J. Ross Memorial Award for Excellence in Law-Related Education.